We caught the train to Long Eaton for the 11am start of the Origami Ride along the
Nutbrook trail. Bikes present were Moultons, Birdys, Airnimals, Bromptons, Dahons, a trike, a Dawes Galaxy and others (sorry I can't recall them all!).

We had the only A-bike, and it was the first one many of the riders had ever seen
in real life, so it attracted alot of interest. The 9 mile trail followed picturesque canal towpaths
which varied from smooth sealed path to dirt sections with a bit of mud thrown in for good measure. The A-bike seemed to handle the dirt and gravel without any problems.

Many people tried the A-Bike during the ride and most found it much better than they had expected. The bike had no trouble keeping up with the gentle pace of the ride.

One interesting observation is that even though I had my custom seatpost and
"standard" racing-bike seat fitted, some people still did not like the seat!
It goes to show that seat choice is a very personal thing.

The Folding Society Origami rides are a great way to meet friendly interesting people
with an interest in bicycles, and small wheel/folding bikes in particular.
I really like the relaxed, welcoming and non-competitive attitude of the group.
It was nice to try out some of the other bikes that were along for the ride.
The ride was superbly organised and led. Another great day out!

A-Bike in the rain

The weather is turning cold now, and the days grow shorter by almost 4 minutes each day! It has been raining quite hard and it has been windy. So here is a review of the riding the A-Bike under these conditions:

Bumps: The A-Bike handles bumps and small potholes better than I expected. In the dark rainy conditions, it was not possible to see the road surface very well, so I ploughed over some bumps that I would otherwise miss. Luckily I know this route well, which helped in avoiding most major obstacles.

Brakes: I did not have to use the brakes too much on this ride, but they performed OK, not great but not bad either.

Deep water!: Some parts of the bike-path were covered in a inch or two of water. The bike went through these OK, but I was wondering how long the wheel bearings would last under these conditions.
Fortunately they look like standard cartridge bearings, available at most bearing shops. The deep water also obscured some sharp bumps that added to the excitement.

Mud protection: All the trees over the bike-path are losing their leaves. They land on the bike-path, where they turn to a muddy slush as cyclists ride over them. So it was no surprise that when I got home, my A-Bike was filthy. So were my shoes and my lower legs. I was clean from my knees up though, so it looks like you don't get a spray up your back from the small wheels. However, the mudguards could be better. Luckily, cleaning the bike is simple: fold it up and stick it in the shower!

A nice cool morning, we decided to go for a ride to Leeds. I took my Birdy, while my wife Cathy took the A-Bike.

We followed quiet backroads through Copmanthorpe and Wighill. At Boston Spa, we stopped for lunch outside the library. 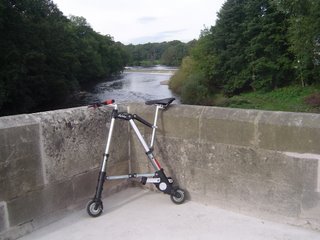 The bridge over the river Wharfe was closed to traffic, but it was still possible to walk across the bridge.
It was nice to hear the sound of the water flowing underneath, something that would be drowned out by the noise of motor traffic any other day.


This was Cathy's first long ride on the bike, but she found it very comfortable. She is about 5 foot 9 inches, and found the riding position just right. The bike did have my custom folding seat on it though.

The route we followed went over some small hills, nothing too steep. The A-Bike climbs very well, and the brakes did everything that was asked of them.

At Leeds we caught a bus back to York. The Birdy went into the luggage rack, while the A-Bike came up onto the top deck of the bus with us.

We really like doing rides like this. With folding bikes you can do longer rides in one direction and then bus or train back home.

Cathy now claims to hold the world record for the longest A-Bike day-ride at 50Km, but would love to hear from challengers!

After looking around at various seat options, I decided that if the seat could fold, then it would have a minimal effect on the folded size.

I bought an ultra light-weight seatpost, an X-Lite metal matrix. This post is one of the lightest post available, being made of some exotic aluminium composite material. This post also allows the seat angle to be adjusted over a very wide range. After removing the two titanium pinch-bolts on the post, I replaced them with a pair of quick-release cams, threaded onto M6 threaded rods, cut down to size. The result is shown in the pictures below. 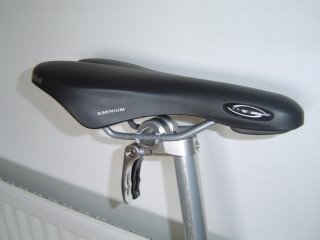 Here you can see the seatpost with the quick-releases, installed where the titanium pinch bolts used to be. This seat is definitely heavier than the original A-Bike seat, although a high-end carbon/titanium seat would minimize the difference. The seatpost is also heavier than the stock post, but not by much. 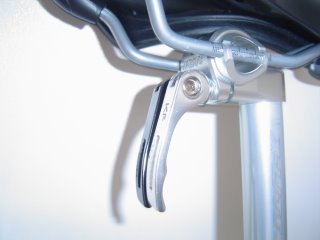 Here is another view. I could not get two quick-releases in the same colour! 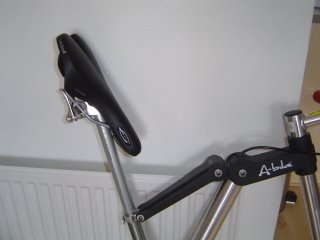 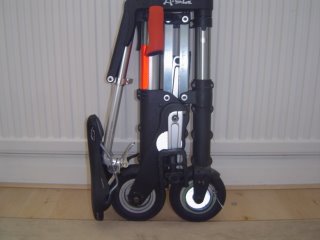 Here is a view with the bike folded.
The seat sticks out about two inches (5cm) more than the original seat. 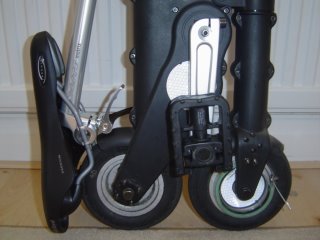 So there it is. Advantages are that you can have the seat of your choice with a longer seatpost. Disadvantages include a slight weight increase, a slight increase in folded size, and there is an extra step to folding/unfolding.

It remains to be seen whether the seat will slip in the long term. These seatposts are not designed to be regularly adjusted. This seatpost also has a 27mm setback, which makes the folded size a bit larger. Although not shown in the photos, I have since added a cable-tie under the seat. The cable-tie is adjusted in length so that it only allows the seat to tilt back to a predetermined angle. So unfolding is now easy, I do not have to manually level the seat, just unfold it until the cable-tie becomes taught.

Today was another nice ride to and from work in the sunshine. However, I did notice that the rear brake was making a slight metallic rubbing sound, so I adjusted the brake. 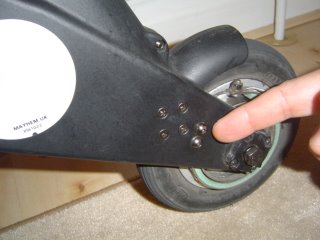 I loosened the two small bolts in front of the rear axle on the left side of the bike, jiggled the brake-band around, so it was centered over the brake hub, and then tightened the bolts. Problem fixed! Now back to work on my folding seat project - details coming soon!

As we head into winter and the days get shorter, lights are becoming a necessity. After an enquiry from sacadoh on http://www.abikecentral.com
I decided to look into lighting options.

Front LED battery lights look easy to fit (centre of the handlebars), but fitting a rear light is harder, since any rearward projection would interfere with the folding.

I had a spare rear LED tailight, so I tried to fit it to the A-Bike. 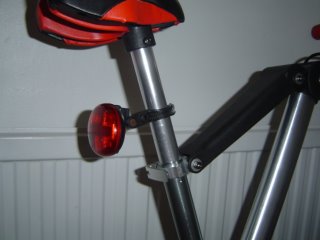 This first photo shows the light attached with the bike unfolded.
No problem here, just like a conventional bike. 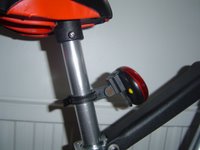 However, this rear-facing light does cause a problem when folding the bike. So before folding, twist the light so it faces forwards. The bike can then be folded in the usual way. These plastic brackets allow you to precisely adjust the clamp tightness so the light can easily be twisted, but it should stay in place while riding. 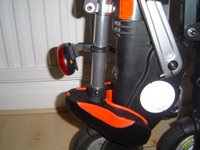 The folded size of the bike is not affected by the light. This particular light has a mounting bracket with quite a long projection. A better bracket would keep the light as close to the seatpost as possible. The tube diamaeter is 25.4mm.

Folding while on the move.

I can fold/unfold the A-Bike while on the move!
Well, not while I'm actually riding it,
but I found that the bike is so light
and the fold so easy, that I can fold
and unfold the bike while
I'm walking along.

I often ride my bike slowly next to my
wife as she walks along. I do this because
I have a knee injury that prevents me walking
long distances. With the A-Bike I can go places
with my wife when she walks. As we near our
destination, I hop off the bike and fold it while
walking. So she never has to wait for me to fold
or unfold the bike.

The transition from riding outdoors to walking with
a folded bike indoors is totally seamless, no stopping!